And He was teaching in one of the synagogues on the Sabbath. And there was a woman who for eighteen years had had a sickness caused by a spirit; and she was bent double, and could not straighten up at all. When Jesus saw her, He called her over and said to her, “Woman, you are freed from your sickness.” And He laid His hands on her; and immediately she was made erect again and began glorifying God. But the synagogue official, indignant because Jesus had healed on the Sabbath, began saying to the crowd in response, “There are six days in which work should be done; so come during them and get healed, and not on the Sabbath day.” But the Lord answered him and said, “You hypocrites, does not each of you on the Sabbath untie his ox or his donkey from the stall and lead him away to water him? And this woman, a daughter of Abraham as she is, whom Satan has bound for eighteen long years, should she not have been released from this bond on the Sabbath day?” As He said this, all His opponents were being humiliated; and the entire crowd was rejoicing over all the glorious things being done by Him.

"You hypocrites," Jesus said of the Pharisees who criticized him for healing a suffering woman on a Sabbath.

"Is there one of you who does not untie his ox or his donkey from the manger on the Sabbath and take it out for watering? And this woman, a daughter of Abraham whom Satan has held bound these eighteen years -- was it not right to untie this bond on the Sabbath day?" he told them.

Last night, the indigenous people, 700 of them, all victims of abuses of government forces, paramilitary groups, and hired goons of big mining companies and agricultural plantations, arrived here in Manila from their very long caravan all the way from Mindanao.

Their goal was to bring attention to the people, through national media who rarely carries their story for one reason or the other, and hopefully putting an end on the abuses, the killings of their children and parents, and the rape of their land which they have been experiencing all their life.

I am not adamant in saying that this is the solution to their problems, and that once they return home to Mindanao everything will be ok already. And I don't believe that they are also in the illusion of believing such. But, I am hopeful, and I believe that they too are hopeful, that this nightmare would eventually end. And being able to bring their plight to our attention, to the attention of the nation and hopefully the world, to the attention of our lawmakers, of people who can do something concrete about the problem, that is victory in itself. And probably, hopefully, something concrete would manifest from this mass action.

In the gathering I met Johndel, a young Manobo from San Miguel (near Makapaso hotspring) in Surigao del Sur. He is a student of ALCADEV, the fateful school for lumads ran by volunteers and invaded by government forces and paramilitary groups, allegedly under the payroll of large mining companies. 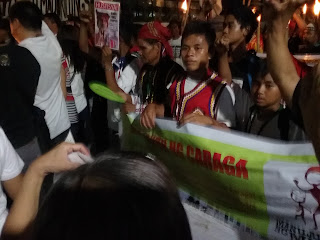 He related that day when the military first came to their school. "We were having a program when they came. We were all afraid but Sir Emok (the school administrator who was tortured and eventually brutally murdered in the school premises by a paramilitary group) was very calm. He is a soft spoken person. He told us not to worry but to hurry with our program so as not to give the military a reason to harass us," he said.

"They were supposed to protect us, but how come they are the one's doing all these bad things to us?" he asked.

When we went to this prestigious university for elites in Quezon City, we were surprised to hear from one of the school's priests words that vilify the lumads, discrediting Manilakbayan 2015, and insinuating links between the lumads participating in the caravan and the revolutionary New People's Army.

"We should remember that social services are supposed to be provided by government. There should be government involvement. But where is government here? The military is government, DSWD is government, but they are not present here," we overheard him telling the young students when we arrived.

"You should understand that in Mindanao there are many groups, ideologues who are in allegiance to the New People's Army and they are using the lumads to advance their interests," he added. "You should know the key players here and you should know their connections."


It is attitude like this that kills the lumads. It is people like this famous and well respected social scientist and religious priest who give government forces, paramilitary groups and hoodlums the reason to kill lumads.

And it is comments like these that give paramilitary groups and military forces the guts to shoot at a very young boy, running for his life after being traumatized at witnessing the gruesome killing of a mentor.

It is our inaction that gives tyrants the strength to occupy schools, and harass and abuse teachers, school administrators, and innocent children.

To hear a respected social scientist, religious priest and government peace consultant say this, gives me the creeps and I could actually hear Jesus saying, "Hypocrite!".