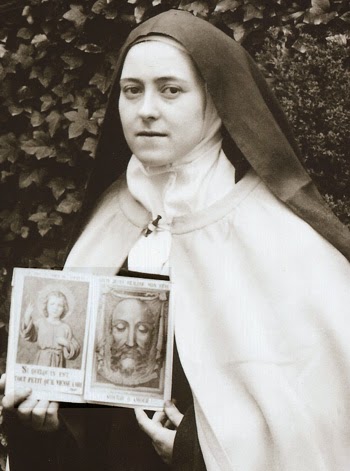 Photo of St. Therese from the net.

On the second visit of St. Therese in the Philippines, in 2008, fate would have it that our paths would cross.

During this time I decided to go back to mainstream media after working for a Congressman from my home province, Negros Oriental. I was hired by The FREEMAN, the country’s longest running regional newspaper and part of the Philippine Star Group of Publications, as sub-section editor for Lifestyle. Part of my responsibility was to cover lifestyle events, since, to be honest, our section – Lifestyle – only had three people – our Lifestyle Editor, our editorial assistant, and me, who handles the kids and campus pages.

On my first day of work, my editor asked me to cover an event. Apparently, the relic of St. Therese of Lisieux was in Cebu. I was a born-again Christian, so what idea do I have about the saint? Nothing, and I was like thinking, why the fuss over some centuries old bones?

I went, I wrote the story and done. My editor praised me because she felt that my beliefs did not hinder me from coming up with a good story on our beloved saint.

In 2013, I entered Carmel but Therese never came to my mind, until I started reflecting on my journey.

For that, Salamat, St. Therese!

But who is Therese of Lisieux?

As you may know by now, St. Therese was a Carmelite, although she is part of that branch of the family which we lovingly refer to as the Discalced Carmelites or the Teresian Carmelites, in recognition to their mother foundress, the reformer of Carmel, St. Teresa of Avila.

The Carmelites have a very long history which dates back to the hermits, the Christian pilgrims who decided to live a life of prayer in the caves of Carmel. This was during the Middle Ages, in the time of the Crusades, around 1097.

Eventually, they were forced to leave Carmel, but for them to survive the world and still preserve the kind of life that they had in Carmel, they had to bond together, and so the Order of the Brothers of the Blessed Virgin Mary of Mt. Carmel was birthed.

In the 16th century, the Carmelites were blessed with St. Teresa of Avila, whose conversion paved the way for the reform of the Order, checking on the lavish lifestyle of the communities and reorienting them back to the life of simplicity in allegiance to Christ.

But on the death of St. Teresa’s partner on the brother’s side, St. John of the Cross on 1593, Teresa died earlier on 1582, Nicolas Doria one of the priests of the reformed communities started the process of officially separating the reformed communities from the Order. This event led to the separation of the Order into the the Ancient Observance and the Discalced. Doria became the first General Superior of the Discalced.

In France, the Carmelites have been present since like the 1200’s, in fact, one of our very first Prior General is Nicholas the Frenchman. He wrote a very critical letter, Ignea Sagitta or the Fiery Arrow, which expressed his ideal of the contemplative life as lived by the ancient hermits of Carmel. This letter is one of the foundations of the spirituality of Carmel.

In 1604, an influential figure in French society, Madam Barbe Acarie, invited the Discalced Carmelite nuns to start a foundation in France, and in 1838, the foundation in Lisieux opened. This is where we find our dear sister, the Little Flower, St. Therese of Lisieux.

St. Therese of Lisieux is also known by her religious name, Therese of the Child Jesus, but not so many knows that her full religious name is Therese of the Child Jesus and the Holy Face. Her family was devoted to the Holy Face of Jesus being a member of the Confraternity of the Holy Face in France. Her name reveals her spirituality, which is to resemble Jesus in his suffering as revealed in his Holy Face, and to be child-like, to be like a child as she revealed to us in her Little Way, of which her sister Pauline, now known as Mother Agnes of Jesus, would later add the phrase, “spiritual childhood.” So the Little Way of the spiritual childhood.

Therese was born in France on January 2, 1873 to Sts. Louis and Zelie Martin. She was the youngest of the couple’s five surviving children, all of them girls, and all of them became nuns. You can see that from her family background, she would really turn out to be devoted to the church.

She was raised in an atmosphere wherein God was viewed as a strict judge and a punishing God, though this was no fault of her parents, because that was the prevailing belief at the time. That is why, she grew up having so low self esteem and for her to compensate for this, she needed emotional support from others, first from her mother, then afterwards with Pauline, whom she considered as her second mother when her mother died when she was still 4 years old, and of course with her father.

She believed that for her to find favor with God she has to be perfect. And if she does something wrong, she must do something heroic, significant, in order to appease God.

With this kind of thinking she developed a kind of a hero attitude, a Messianic complex, believing that she must do something great to please God. And mind you, she felt that she is always wrong, that she always disappoints God. They had a name for this condition, the scrupples.

She never thought that she deserved God’s loving embrace. She longed for perfection, but then no one is perfect, and she always finds something wrong with herself.

All of these changed. What changed her? The Bible, where she encountered these verses:
Then she realized that when she does something wrong, her father's love never wanes and if she goes to him, he would still allow her to sit on his lap.

If her father could afford her this much love, how much our heavenly Father who is the source of all compassion and mercy.

God also does not require perfection from us, he does not need us to do great things to experience his forgiveness and love. He already did that by sending us His son, His son of all people, to be the sacrifice that would cleanse us of our sins.


“For God so loved the world that He gave us his only begotten Son that whoever believes in him will not perish but have eternal life.”

John 3:16, the very first Bible verse that I learned as a child.


“I do not want to lay up merits for heaven. I want to work for your love alone with the sole purpose of pleasing you, consoling your sacred heart, and saving souls who will love you eternally. In the evening of this life, I shall appear before you with empty hands, for I do not ask you, Lord to count my works. All our justice is stained in your eyes, I wish, then, to be clothed in your own justice and to receive from your love the eternal possession of yourself.” (An Act of Oblation to Merciful Love, Story of A Soul)


“I understood that the Church had a Heart and that his Heart was burning with love. I understood that it was love alone that made the church’s members act… I understood that love comprised all vocations, that love was everything, that it embraced all times and places… in a word, that it was eternal! Then, in the excess of my delirious joy, I cried out: O Jesus, my love… my vocation, at last I have found it… My vocation is Love!... O my Jesus! I love you! I love the Church, my mother! I recall that the smallest act of pure love is of more value than all other works together.” (Chap XI: A Canticle of Love, Story of A Soul)

Therese’s Little Way is the way of love, it is the spirituality of the little children and perhaps this could be the reason why, as mentioned earlier, her sister, Pauline, would refer to it as the “little way of spiritual childhood.”

On her “Little Way,” Therese said:


“I will seek out a means of getting to Heaven by a little way—very short and very straight, a little way that is wholly new. We live in an age of inventions; nowadays the rich need not trouble to climb the stairs, they have lifts instead. Well, I mean to try and find a lift by which I may be raised unto God, for I am too tiny to climb the steep stairway of perfection. [...] Thine Arms, then, O Jesus, are the lift which must raise me up even unto Heaven. To get there I need not grow; on the contrary, I must remain little, I must become still less.”

In her letter to her missionary friend, Fr. Adolphe Roulland (May 9, 1897), Therese said:


“Sometimes, when I read spiritual treatises in which perfection is shown with a thousand obstacles, surrounded by a crowd of illusions, my poor little mind quickly tires. I close the learned book which is breaking my head and drying up my heart, and I take up Holy Scripture. Then all seems luminous to me; a single word uncovers for my soul infinite horizons; perfection seems simple; I see that it is enough to recognize one's nothingness and to abandon oneself, like a child, into God's arms. Leaving to great souls, to great minds, the beautiful books I cannot understand, I rejoice to be little because only children, and those who are like them, will be admitted to the heavenly banquet.”

Today, Therese is challenging us, she is telling us that we don’t need to do great things to achieve holiness, we only need to do little things, to embrace the little way, and what is the little way?

The way of love.

If we put love in everything we do, no matter how little we think it is, God will surely be pleased, but why would we want to please God? Because we love Him, we love Him because He loved us first. We love Him because despite of our unworthiness, He still loves us so much, that he sent us Jesus, his only Son.


St. Therese showed us this path, she showed us that all we need is love, that our vocation should be love, because in the heart of the church is love.