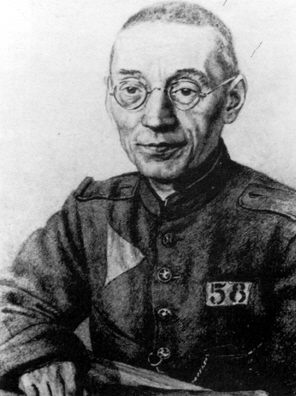 Titus Brandsma, prophet and martyr, was known for his love for the Blessed Mother.

In many of his preaching and teachings, he encouraged the faithful to be the other theotokos, to be like the Blessed Mother, who, with her yes, with her obedience to the Father, was blessed to carry the Son, our Lord Jesus Christ, to the world.

But more than preaching this idea, he lived by it.

Father Titus has a special love for the poor, and he believes that the poor has just as much right for the food that they have in their community than the friars, that is why one time he told the brother at the monastery door: “Do not be stingy with giving food and money to the poor for they have a right to them and a right to live.”

More than the material needs of others, Father Titus is charitable with his time, listening with genuine interest on the concerns of others and giving out useful suggestions. This, coupled with his cheerful attitude, made him a byword and a welcome sight in the different Carmelite communities in the Netherlands.

In his every encounter, he makes sure to bring Jesus to those he meet, and at the same time, he considers each encounter as an encounter with Christ, that is why many of those who comes in contact with him would say that after the encounter they feel that they have come to know Jesus even more, or that their relationship with the Lord has become more meaningful.

Perhaps, nothing would best exemplify how Father Titus lived to be the other theotokos than during the time when he was imprisoned by the Nazis leading to his death in Dachau by lethal injection.

The nurse who administered the injection said that every day, when Father Titus was confined in the infirmary before the fatal injection, sick people would gather around his bed and he “always had the knack of reanimating them.”

“For the most part, sick persons are concerned about themselves and think only of themselves, but the Servant of God was always in good humor and was a support to all, and myself in particular,” she said.

“He had a great compassion for me. He asked me how I had ended up here. I told him how things had gone. He did not show the slightest bit of hatred for me. Once he took me by the hand and said, ‘You’re a good girl, I will pray for you very much…’ For other patients I often felt aversion… only Father Titus I immediately found attractive and I lived him, since he was a good patient,” she said.

This encounter with Father Titus, enlivened the faith of the nurse, bringing her back to the Church.

In our everyday encounters, Father Titus asks us to bring Christ with us, not for us to keep for ourselves, but for us to share with others, to the world. He showed us how to be compassionate even to those who persecute us.

Father Titus treasured Christ in his interior life, and although he was not much into the external mystical expression of his faith, but such interiority could not be hidden and this is expressed in the way he dealt with people, the way he treasured each encounter, most especially with the people who caused him so much pain, especially physical pain.

Like Mary who suffered at the passion and death of his son, but rejoiced at his resurrection, looking forward, together with the community of Christ’s disciples, for his return, Titus patiently bore his sufferings, but in every suffering he rejoiced at the opportunity of being the other theotokos, the opportunity of being able to bring and to show the Child Jesus to others.

Until the end of his life, Father Titus became the other Mary.

In our everyday struggles, how can we bring Jesus to others?