We are not ours 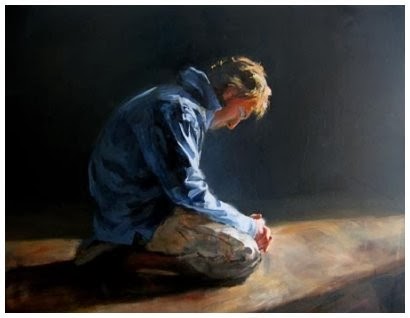 While the crowd was pressing in on Jesus and listening to the word of God, he was standing by the Lake of Gennesaret. He saw two boats there alongside the lake; the fishermen had disembarked and were washing their nets. Getting into one of the boats, the one belonging to Simon, he asked him to put out a short distance from the shore. Then he sat down and taught the crowds from the boat. After he had finished speaking, he said to Simon,"Put out into deep water and lower your nets for a catch." Simon said in reply, "Master, we have worked hard all night and have caught nothing, but at your command I will lower the nets." When they had done this, they caught a great number of fish and their nets were tearing. They signaled to their partners in the other boat to come to help them. They came and filled both boats so that the boats were in danger of sinking. When Simon Peter saw this, he fell at the knees of Jesus and said, "Depart from me, Lord, for I am a sinful man." For astonishment at the catch of fish they had made seized him and all those with him, and likewise James and John, the sons of Zebedee, who were partners of Simon. Jesus said to Simon, "Do not be afraid; from now on you will be catching men." When they brought their boats to the shore, they left everything and followed him.
- Luke 5:1-11

All belong to you, and you to Christ, and Christ to God.

In the person of Titus Brandsma we see humility embodied. With all his achievements, he was expected to go for further studies in Rome. He was the best candidate. But his superior thought otherwise, instead he was made the sacristan in his community, his potential was not appreciated and utilized. He knew he was the most deserving candidate, yet in all humility he submitted himself to the desires of his superior.

When the Nazis subjected him to so much humiliation, reducing his dignity to that of an animal, he was still able to afford to smile and to show his gratitude to his prisoners, or even to those who abused him – physically, verbally, emotionally. His fellow prisoners thought that he was crazy, apparently, he also embodied what Paul said in today’s reading: Let the wise be a fool.

In today’s Gospel we see the calling of Peter together with the brothers James and John. Peter, it seems, have seen and experienced the greatness of Jesus.

Yesterday, Jesus healed his mother, allowing her to serve Him. Today, he heard Him speak, and like the people who urged the Word to be spoken, he was deeply impressed and touched, and then there is the miracle of the catch. Who won’t be scared, “I am in the presence of a Holy man!” And he was humble enough to lower himself, kneel, and to confess his sinfulness. Such humility afforded him the world. "Do not be afraid; from now on you will be catching men." He was to attract and inspire people to the task of revealing the reign of God’s Kingdom.

The perfect model of humility we find in Christ. Jesus Christ who is God himself, subjecting himself to all forms of humiliation known to man. He was the greatest fool, allowing himself to be humiliated, to be killed, to be murdered, to know pain, just so we, who enjoy sin so much that we could not separate ourselves from it, we whom he did not know or is not related to him whatsoever, just so we would be saved from the pain and the suffering of our sin. And this humility we remember everytime we share in his sacrifice in the Eucharist. But the question is, just as we remember Christ’s redemptive, salvific, altruistic humility, can we, just as much humble ourselves? Can we put ourselves, our authority, our knowledge, our wisdom, can we let it fade and allow others to steal the limelight from us, for others to steal the credit, to allow them to grow, to allow them to bask in the glory that we should have deserved and worked so hard to achieve? Can we allow others to have the last say and be quite with a humble and loving heart?
Labels: Carmelites community gospel reflection humility Titus Brandsma