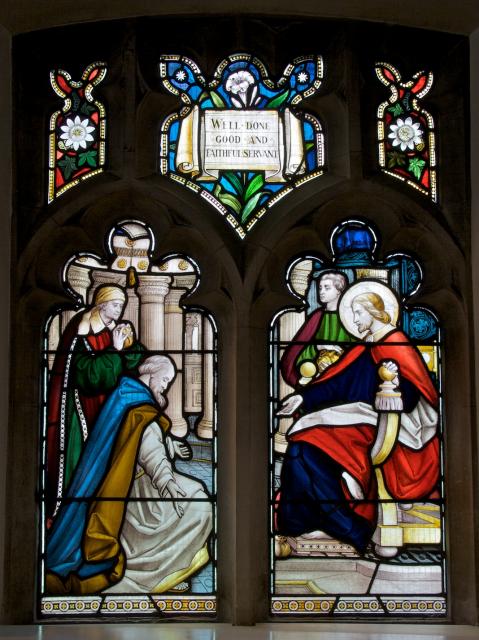 While people were listening to Jesus speak, he proceeded to tell a parable because he was near Jerusalem and they thought that the Kingdom of God would appear there immediately.


So he said, "A nobleman went off to a distant country to obtain the kingship for himself and then to return. He called ten of his servants and gave them ten gold coins and told them, 'Engage in trade with these until I return.' His fellow citizens, however, despised him and sent a delegation after him to announce, 'We do not want this man to be our king.' But when he returned after obtaining the kingship, he had the servants called, to whom he had given the money, to learn what they had gained by trading. The first came forward and said, 'Sir, your gold coin has earned ten additional ones.' He replied, 'Well done, good servant! You have been faithful in this very small matter; take charge of ten cities.' Then the second came and reported, 'Your gold coin, sir, has earned five more.' And to this servant too he said, 'You, take charge of five cities.' Then the other servant came and said, 'Sir, here is your gold coin; I kept it stored away in a handkerchief, for I was afraid of you, because you are a demanding man; you take up what you did not lay down and you harvest what you did not plant.' He said to him, 'With your own words I shall condemn you, you wicked servant. You knew I was a demanding man, taking up what I did not lay down and harvesting what I did not plant; why did you not put my money in a bank? Then on my return I would have collected it with interest.' And to those standing by he said, 'Take the gold coin from him and give it to the servant who has ten.' But they said to him, 'Sir, he has ten gold coins.' He replied, 'I tell you, to everyone who has, more will be given, but from the one who has not, even what he has will be taken away. Now as for those enemies of mine who did not want me as their king, bring them here and slay them before me.'"

Faith in the coming of the Kingdom, that is the message of today’s Gospel. When Jesus and his followers were approaching Jerusalem, they thought that God’s Kingdom would be established, immediately on their arrival. It was like, an expectation that was so hard to correct, because, it would surely disappoint many of his followers.

When you tell a manang (an old devout lady), “Nay, mali po yung ginagawa nyong pagdarasal. Di niyo po kailangang saktan sarili nyo, (Mother, what you are doing is wrong; you don't need to hurt yourself)” how do you think the manang would feel?

“Apo, pabalik na ako, papunta ka pa lang, kaya tumahimik ka (Grandson, I'm returning, you're still going, so keep quiet)”, but it’s different if its someone in authority who would speak, and almost often, you would run the risk of losing people, of being the cause for them having a crisis in faith.

As always, Jesus told his parable. “It is not the destination that matters, it is the journey,” as what our late brother, Bernard Roosendaal, used to remind us. And just how did we do in our journey?

Of course, we have different journeys, at times we can be together, but most of the time, we are alone. But in this journey, how did we fare?

Our first reading, from the book of 2 Macabees, tells us of the story of a mother and her seven sons who were put to death, because they refuse to eat pork, considered a no, no for the Israelites. 2 Maccabees talks a lot about death, dying, martyrdom, and the end of days – the resurrection of the dead, and in this particular passage, we once again are introduced to this eschatological doctrine.

Faith in God, faith that our life on earth is not the be-all and end-all of our life, but it is merely a passage, en route to that heavenly Jerusalem where we dine and wine in the abundant banquet of the heavenly feast of the lamb, not a feast of lambs, but who knows there could be an abundance of lamb chops in the feast.

“He, in his mercy, will give you back both breath and life, because you now disregard yourselves for the sake of his law... be worthy of your brothers and accept death, so that in the time of mercy I may receive you again with them,” says the mother.

And in our responsory: Lord, when your glory appears, my joy will be full. Or in the psalm: But I in justice shall behold your face; on waking, I shall be content in your presence.

It is not the destination that matters, what really is satisfying is the anticipation of reaching the destination, knowing that when we arrive there, when we wake from our slumber, we would see His face.

After climbing for hours and days even, when you reach the peak, “Oh, Lord, thank you.”

The breath of life, of fulfillment, of satisfaction, but after a while, it becomes boring and you want to go back, return to the journey, anticipating the next journey.

Have we kept them aside, fearing that we might lose them? Or of what others would say? Or did we nurture them, treasure them, make them grow, make our brothers grow?