The Birth of Jesus Christ

18 Now the birth of Jesus Christ took place in this way. When his mother Mary had been betrothed to Joseph, before they came together she was found to be with child from the Holy Spirit. 19 And her husband Joseph, being a just man and unwilling to put her to shame, resolved to divorce her quietly. 20 But as he considered these things, behold, an angel of the Lord appeared to him in a dream, saying, “Joseph, son of David, do not fear to take Mary as your wife, for that which is conceived in her is from the Holy Spirit. 21 She will bear a son, and you shall call his name Jesus, for he will save his people from their sins.” 22 All this took place to fulfill what the Lord had spoken by the prophet: 23 “Behold, the virgin shall conceive and bear a son, and they shall call his name Immanuel”
(which means, God with us). 24 When Joseph woke from sleep, he did as the angel of the Lord commanded him: he took his wife, 25 but knew her not until she had given birth to a son. And he called his name Jesus. 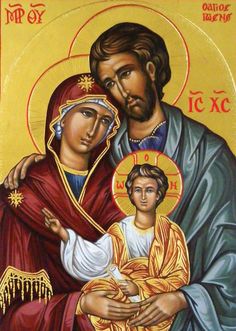 The Gospel according to Matthew was written for Jews who have been converted to Christianity. One of the challenges that they faced at the time was to prove that Jesus was and is indeed the Messiah, the promised one who will deliver them, and all nations, from slavery.

Many Jew converts at the time were disheartened, doubting, not knowing if indeed Jesus was the Christ. So Matthew took the task of recalling the words of the prophets that he believed would describe Jesus as the one, and then knowing that his people loves tracing their roots, he indulged them with Jesus’ genealogy, tracing his roots to the patriarchs, particularly that of David for as the prophet Jeremiah said,


“The days are surely coming, says the Lord, when I will fulfill the promise I made to the house of Israel and the house of Judah. In those days and at that time I will cause a righteous Branch to spring up for David; and he shall execute justice and righteousness in the land. In those days Judah will be saved and Jerusalem will live in safety. And this is the name by which it will be called: “The Lord is our righteousness.” (Jeremiah 33:14-16, NRSVCE).

But more importantly, what today’s Gospel is telling us is the beauty of the Holy Family. What separates them from the rest?

We do know that Mary conceived Jesus out of wedlock. She was a virgin, for as Isaiah said, “Therefore the Lord himself shall give you a sign. Behold a virgin shall conceive, and bear a son, and his name shall be called Emmanuel.” (7:14, DRA).

What did Joseph do?

In those times, typically when a woman is pregnant before she is wed, the groom would tell on her to the authorities to save face. What would happen to the bride would be brutal. She would be stoned to death.

The justice of Joseph would have him thinking of just leaving Mary without reporting her to authorities. Of course several things may happen. Mary might look for another man hoping that that man would actually marry her without surrendering her to the “morality police” or just carry the child on her own and still risk being stoned to death.

What happened next, however, was unthinkable. Inspired by a dream, Joseph decided to push through with the wedding, saving the life of Mary and the baby she was carrying in her womb, our beloved baby Jesus.

We could only but imagine how Matthew’s readers would have reacted, realizing that the Jesus that he was preaching about was conceived out of an illicit affair must have harassed them and enraged their sensitivities. But this is the wonder of Jesus.

Everything about him has nothing to do with his royal blood. He was totally a contradiction to tradition. He was not the King adorned in jewels that they were expecting. He was not born of a rich family. Mary may be of royal lineage, but her side of the family ended up way outside of the margins. They were not rich. She had nothing, except Joseph, and Joseph  was all she needed. Joseph, was all that Jesus needed.

The Holy Family, is not our traditional family in all respects, but they reflect the many issues that hound many of our families these days. Single parenthood, children born out of wedlock, relationships facing opposition from society’s moralistic (and may I add, hypocrite) standards, and of course, poverty. But what example does the Holy family show us? They are telling us to love. To just love, to let love permeate into the very fiber of the family, and somehow, someday, all challenges will be overcome.