To be accepted is to experience peace 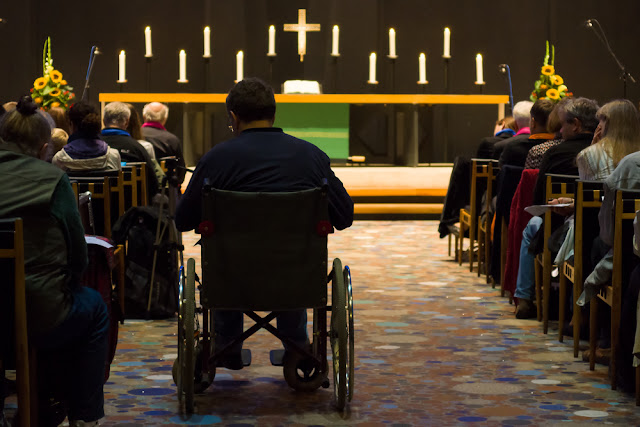 Ray Guillano, 34 years old and married, was not born with a disability. Growing up, he was very active but when he reached the age of 13, one of his limbs started to atrophy and he started to have difficulty walking. When he was six he was brought to Cebu Doctors Hospital in Cebu from the town in Baybay, Leyte because of high fever. Apparently he caught the polio virus. He was not able to receive any therapy after the symptoms subsided, which he said was because they could not afford to bring him to therapy.

“Maybe if I continued with the therapy then the effect of polio would not have been this worse,” he said with regret in his voice.

With one limb shorter than the other, it was not just walking that he had to endure. As a teenager he felt very insecure because of the disability coupled by the taunts of his peer. Everytime he sees people talking or when people look at him he feels that they are talking about him, ridiculing him for his abnormality. He felt that he was not accepted.

He felt this way for two years. He was anti-social and is shy to join and be with other people. He feels that he is always being judged by people. One day, concerned for the way Ray was behaving, his grandmother brought him to the church. He said that his grandmother do not usually go to church, but just so he would realize that what he was doing to himself was not good, his grandmother started to go to church regularly, Ray in tow.

“Sabi ng lola ko, hindi naman sinadya yung sakit ko at hindi ko ito ginusto saka kung alam na ganito ang mangyayari, papayag kaya ako, siyempre hindi. Kailangan ay acceptance sa sarili. May purpose kung bakit binigay ito sa akin (My grandmother used to tell me that the way I am was not intentional and they did not want it and if he knew what would happen to him, he would not accept it. What is needed is self-acceptance. There is a reason why I have this condition),” Ray said.

One day, while attending mass in the church, the priest came to him, talked to him and asked him to be part of the youth group. He was inspired by this acceptance that was given by the priest. He felt that he was included.

“Sabi ng pari sa akin, isama kita sa youth, simula noon naging active na ako sa simbahan. Four years akong naging presidente sa youth, bago ako kinausap para naman sumali sa pulitika (The priest said, I will include you with the youth, and from then on I was active in the church. I was the president of the youth for four years before I was asked to join politics),” he said.

Self-acceptance led to more opportunities for Ray as now he felt more sure and confident with himself. He came to Manila to work for a relative. He finished high school but because he was working he had not time to get a Bachelors degree. Instead he finished two vocational courses. When he left his relative he worked for a resort based in Bataan where he met his wife, Joanna, with whom he has two children – Exequiel and Angelica. Ray now manages one of the resorts in Saysain.

“Simula nung tinanggap ko ang aking sarili, kung ano ang meron ako; nung na feel ko na tanggap ako, yun yung panahon na nasimulan kong maranasan ang kaginhawahan (When I started to accept myself, what I have; when I felt that I was accepted, that is the time when I started to experience peace,” Ray said.

“Ang kailangang gawin ng simbahan para sa may kapansanan ay yakapin sila, isama sila, i-engganyuhin, lalo na yung mga mahina ang loob kasi nahihiya lang yan sila at dahil sa panghuhusga ng mga tao (What the church needs to do for people with disability is to embrace them, to include them, to encourage them, specially those who don’t have the guts because they are just shy and because of the judgment of others),” he added.

*This is one of the stories I encountered in the process of writing my theological thesis on community based rehabilitation (CBR/CBID) as a pastoral approach in the care of persons with disability. The study is still on-going.