What is a prophet? 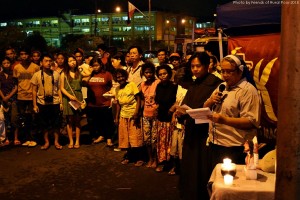 Just what does it mean to be a prophet? As a Carmelite and as a Christian, how can I live the Order's prophetic tradition?

For the Carmelites, the Prophet Elijah plays a major role in its prophetic and contemplative tradition.

In 1 Kings 21, the prophet was confronted with the issue of land-grabbing, when Israel's King Ahab took Naboth's vineyard by murdering him.

For decades now, hundreds, if not thousands, of farmers have been killed for their land. Many of these victims are lumads, or natives, indigenous people who have been taking care of the land for generations. A very famous martyr is Macli'ing Dulag, an Igorot tribal leader who was killed for opposing the building of the Chico Dam by the Marcos regime. The dam would have submerged several communities in the area, and would have affected some 100,000 hectares of ancestral land and some 250,000 locals.

Macli'ing said: "You ask if we own the land. You mock us. Where is your title? Where are the documents to prove that you own the land? Title. Documents. Proof. How can you own that which will outlive you? Only the race own the land because only the race lives forever. To claim a piece of land is a birthright of every man. The lowly animals claim their place; how much more man? Man is born to live. Apu Kabunian, lord of us all, gave us life and placed us in the world to live human lives. And where shall we obtain life? From the land. To work (the land) is an obligation, not merely a right. In tilling the land, you possess it. And so land is a grace that must be nurtured. To enrich it and make it fructify is the eternal exhortation of Apu Kabunian to all his children. Land is sacred. Land is beloved. From its womb springs life."

What's the difference between Naboth and Macli-ing Dulag? Both of them were killed for their land.

What's the difference between Naboth and the countless of Filipinos who's land and very life were stolen from them by rich tyrants and with government leaders pretending not to see and hear, and so would not speak about it?

What's the difference between Macli-ing and Elijah? Both of them were prophets, denouncing the cruelty and the evil deeds of the leaders. Both of them spoke of a God, who looks after His children and both of them tried to be God's surrogate in this world by defending the voiceless and the victims of unjust systems. 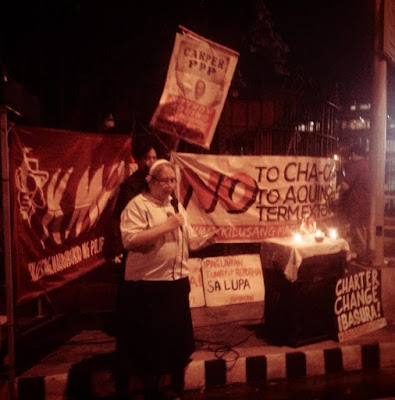 In June 2015, several farmers from Central Luzon and the Southern Tagalog Region converged at the Batasang Pambansa Complex to oppose the plan of the House of Representatives to enliven the failed Comprehensive Agrarian Reform Program through House Bill 429 or the Notice of Coverage Extension Bill. At the same time they opposed the proposed Charter Change with Resolution of Both Houses (RBH) No. 1, seeking for the loosening of the restrictions against ownership of certain properties and businesses in the country.

If Elijah wasn't there to speak for what was right, would justice be given to Naboth? Would King Ahab realize his wrong deeds and humble himself before God?

If there were no Christians to defend the rights of the marginalized and the oppressed, will justice be given to them? Even with the many modern prophets denouncing the evils of government leaders, nothing seems to happen, how much more if the streets and the holy walls of Congress were silent?

It is said that as Christians we share in Christ's three-fold mission by virtue of baptism - prophet, priest, and king.

But how can we share in His prophetic mission when most of the time we willingly tolerate the evils of society, even criticizing those who speak against the ills of government with such petty and selfish remarks as, "these people have nothing good to say of our government," or worse, "they are the number one cause of traffic in the metro."

One Aeta grandmother asked me, "Why is it that the price of grain in our place is very expensive when they buy our produce at a very low price?"

I could only be silent. Our idolatry with money and comfort can at times blind us of our unjust actions and the suffering that it causes other people. Why could we be so cruel?

Taking from Prophet Elijah, contemplation led him to become a prophet, denouncing the evil ways of the world, fearlessly criticizing the wrong doings of the leaders of Israel, and himself becoming the embodiment of God's word by doing His will as outlined in the sacred scriptures of his people.

Seriously. Do we even consider that we, as Christians, are called to be prophets, to denounce the wrong doings of our leaders and be a source of comfort to the poor, the marginalized, the oppressed?

How can we live with the challenge of becoming prophets of our time? Or do we prefer to live comfortably in apathy and ambivalence, preferring to choose that which are comfortable for us, even if it means giving up on our basic spiritual, moral, and ethical principles as professed followers of Christ? Or do we simply reason out, "Let Ceasar's be Ceasar's and God's, God's?" and marginalize the church when it comes to physical concerns relegating it to spiritual matters?

A friend once asked me regarding activists, "Do these people not care about their own families that they would prefer to spend all their time protesting to the point that they are no longer able to provide the basic needs of their family? What happens if they get killed, their families would suffer even more, as if their families are already not suffering because of their utter lack of sense of responsibility by not meeting their family's needs."

But then, come to think of it, they do care for their family that they are even willing to sacrifice their own lives, their own comfort just so they'd be able to build heaven on earth, for the future generations not just for this generation.

To be honest, these people can choose to live a comfortable life if they wanted to. Its a constant temptation for them. They are intelligent, they have guts, and they have the skills to survive in our capitalistic dog-eat-dog world. But constantly they renew their vows to choose the less comfortable life of serving the people, answering God's call to be modern time prophets.