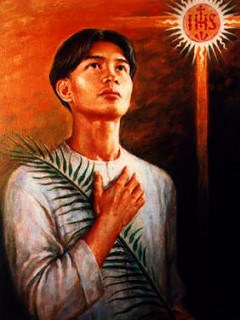 He was a lay catechist and a companion of Jesuit missionary Fr. Diego Luis de San Vitores. There are only a few accounts on San Pedro Calungsod, for who would have thought that a native would embody the teachings of Christ, deserving him a place in the annals of the Saints.

San Pedro Calungsod was killed by a native called Matapang, who left the Catholic faith believing a rumor spread against the missionaries, that they were the cause of infant deaths in their islands. So when his own baby was baptised by the missionaries, he was enraged.

On April 2, 1672, Matapang killed San Pedro Calungsod with a spear and finishing him off with a cutlass, and then threw his body into the ocean.

Being a strong bodied young man, San Pedro Calungsod could have chosen to defend himself or could have ran away if he wanted to, but he chose to stay beside his companion, the 45-year old Spanish priest, Fr. Diego.

San Pedro Calungsod is the second Filipino saint. The first is San Lorenzo Ruiz de Manila. Both were young men, and both died as migrants, in other countries.

The following is a story I wrote on the pilgrims who went to his canonization. This story was first published in The FREEMAN on 20 October 2012, and subsequently in PhilStar.com, with the title "Witnessing sainthood, a blessing and an opportunity."

***
Not everyone has the opportunity to witness firsthand the canonization of a saint, so much more one claimed to be a Cebuano.

An estimated 10,000 Filipinos, around 3,000 of whom are Cebuanos, left for pilgrimages that will end in Rome starting mid-October to witness the canonization of Beato Pedro Calungsod. The cost per trip is at least P150,000 and could easily climb to P200,000, depending on the chosen package.

“Every Catholic dreams of witnessing the canonization of a saint,” said Salvador, “at least in our lifetime we can witness (one).”

Salvador went with her parents. “My mom is a devout Catholic, and it has always been her wish to meet the Pope,” she said, adding that to be able to meet the Pope and at the same time witness him elevate a Cebuano into sainthood is more than what she or her mother dreamt.

For Tugonon, having the means to witness the canonization is an opportunity that not many are able to enjoy, and to be given such a blessing would only mean that there is no reason to miss the opportunity.

“It is not easy for us Filipinos to choose a saint,” he said, adding that the chances of having another Cebuano saint in this lifetime would be very remote.

Both Salvador and Tugonon are involved in the raising of funds for the canonization.

Mildred Simolde, 66, who will also witness the canonization, traces her relationship with her Dodong Pedro Calungsod even before Calungsod was beatified.

“When I went to Guam in July 1998 I made it a point to research on Pedro Calungsod,” she said, but what she found out was distressing. The people she asked about Calungsod never knew or even heard of him. And although she found a painting that bore a representation of Calungsod, the painting was mainly of Beato Padre Luis de San Vitores, the Spanish Jesuit Missionary whom Calungsod served as an altar boy and companion.

Simolde admitted that at first she was doubtful of Calungsod’s qualifications given the feedback she got from her travel to Guam, but her involvement in church as president of the Parish Pastoral Council of Christ the King Parish in Alang-alang, Mandaue City and as the regional president for Northern Mindanao of the Children of Mary, she also got involved in the effort for the Calungsod’s beatification.

But she did her tasks half-heartedly, still doubting the sainthood of Calungsod.

When the day of his beatification came, Simolde came to the realization that her views on Calungsod were misdirected. Since then, her family adopted Calungsod as a member – for her, Calungsod is her son, and for her three children, their brother.

Simolde vowed to spread the message of Beato Pedro Calungsod in the hope of aiding the journey towards his sainthood. She proudly related how she was instrumental in spreading the message of Calungsod in Mindanao as she got to speak in several gatherings of priests from all over Mindanao, or the church visits that she used to do, just so she would be able to talk of Calungsod.

Even in her travels abroad, Simolde related that she would usually talk to people whom she believed to be Filipinos, encouraging them to pray to Calungsod to intercede in their petitions to God.

“Dodong Pedro is a very good child, and he is not like other saints who seem hard to talk to. He feels so near and so easy to talk to,” she said.

“I wish that people would treat him like a young boy and get close to him,” she said.
For Simolde, the trip to the Vatican for Calungsod’s canonization is but a fulfillment of a promise she made to her son, Dodong Pedro, and the ease in getting her papers approved was, for her, a sign that Calungsod approved of her decision.

“When I went to Sun Travel and Tours in General Maxilom Avenue, I was expecting that I would have difficulty going there especially with the parking, so I told Dodong Pedro, ‘Now that you will be a saint, I am sure that you would be very busy but would you still work for me?’ and right then, when I entered Cherry Court, a car vacated a parking space,” she said.

However, Simolde also said that if not for the promise she made, she would have chosen to stay behind, knowing that the money that she would spend on the trip could help many people in her community.

“For me, whether I will attend (the canonization) or not, it will be the same,” she said, because for her, Calungsod is already a part of her life and her everyday routine.

Still, to be able to attend a special event of someone close to her, Simolde, like a proud parent, is elated.

“It would be like attending his graduation or his marriage,” she said.

For the few Cebuanos, the opportunity to be able to go to the Vatican and witness the canonization of the first Cebuano Saint is one that should not be taken for granted. Regardless of their reasons in going to the Vatican, Pedro Calungsod remains to be the focus of their travel, and in coming back, they all intend to bring Calungsod into the lives of the people they serve.

For the faithful, San Pedro Calungsod embodies the following virtues, which every Roman Catholic faithful must emulate:

Fortitude. Of the cardinal virtues which Pedro Calungsod possessed, fortitude shines out clearly in his courage and perseverance to teach the Christian Faith to the Chamorros even in the midst of hostility, in his resolve to stay with and assist the superior of the Mission, Fr. de San Vitores, even in the time of adversity. Fortitude finally made him face a violent death on account of the Faith.

Spiritual Poverty. Pedro Calungsod was poor in spirit for he was able to leave everything behind at a tender age—beloved family and homeland and a convenient life—all in order to proclaim the Gospel to the Chamorros.

Chastity. Pedro Calungsod never gave in to the immoral practice of the young male prostitutes in the Marianas at that time, as some of his acquaintances did.

Prayerfulness. Despite the difficult life and tight schedule in the Mission, Pedro Calungsod never neglected his prayers which kept him faithful to Christ.

Strong devotion to the Eucharist. Pedro Calungsod never went out into a missionary journey without first receiving Holy communion which made him fearless in the face of dangers.

Frequent Confession. Pedro Calungsod never went out into a missionary journey without first confessing his sins to the priest and receiving the absolution. That made him always ready to face death anytime.

Hope. It may be said that Pedro Calungsod’s perseverance in the difficult and troubled Mariana Mission was sustained by his Christian hope for eternal salvation and happiness after such earthly trials. He himself must have communicated this hope to others more by example than by words. In a particular way, if his death gave more courage to Fr. de San Vitores to die also for the Faith, it can be said that Pedro Calungsod demonstrated this hope through his willing acceptance of martyrdom.

Charity. The foundation of all the goodness of Pedro Calungsod cannot be but his great love for God and love for his fellowmen as manifested in the following facts which also reveal his other virtues:  in his zeal to join and help the foreign Mission in the Marianas, a zeal which must have been inspired also by the example of Fr. de San Vitores;  in his dedicated service in the Mission —a quality that may have even edified the Superior of the Mission, Fr. de San Vitores; in his selflessness in risking his young life in a troubled far-from-home Mission; in his perseverance in serving the difficult Mission right from the start in 1668 up to his violent death in 1672; in living what he taught, so much so that he was remembered to be a virtuous catechist; in his heroic obedience to Fr. de San Vitores, accompanying the latter in an apostolic task even in the time of imminent danger when he ought to have taken refuge immediately in the fortified Residence; and in not carrying any weapon for self protection as willed by Fr. de San Vitores; in his courage to teach the Christian Faith to the Chamorros even in the midst of hostility; in his faithfulness to Fr. de San Vitores whose mission he always supported and whom he never abandoned even in the time of adversity, thereby imitating Jesus Christ who showed the greatest love in laying down his life for his friends (cf. Jn. 15:13); in his humility in not using his physical prowess to defend himself or to defeat his aggressors; in his non-violent response to his aggressors; in shedding his blood for the Christian Faith, thereby proving himself to be a good soldier of Christ; in being an edifying Christian, for his death even gave new courage to Fr. de San Vitores to die also for the Christian Faith.

Prayer with San Pedro Calungsod de Cebu:
San Pedro Calungsod de Cebu, student, catechist, young migrant, missionary, faithful friend, martyr, you inspire us by your fidelity in times of adversity; by your courage in teaching the Faith in the midst of hostility; and by your love in shedding your blood for the sake of the Gospel. Make our troubles your own (Mention requests) and intercede for us before the throne of Mercy and Grace, so that, as we experience the help of heaven, we may be encouraged to live and proclaim the Gospel here on earth. Amen.
Labels: feast Filipino martyr Pedro Calungsod prayer saint spirituality